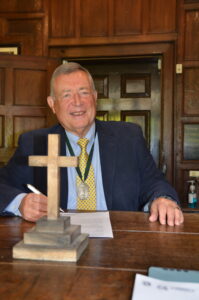 Laurence was born in Surrey and moved to Abingdon with his wife Barbara in 1981.

Laurence’s career was spent working for some of the country’s major retailers; Debenhams, The Burton Group, The Arcadia Group, BHS and The Kingfisher Group. Initially as a Company Secretary and then moving through audit, finance and risk management, then in 2002 he became a director of B&Q. Before retiring from corporate life he  spent  time in France working for B&Q’s sister company Castorama. Then followed eight successful years as a consultant working for the Oris Group of companies based at Harwell and was also a non-executive director of a Manchester based facilities management company.  Laurence’s experience within his various career roles and local interests will enable him to contribute his time as a Governor to the principal aims of Christ’s Hospital.

Laurence is a Trustee of The Abingdon Bridge a local charity which supports young people in challenging circumstances.

He is a member of St Michael’s and All Angels Church in Albert Park, previously a Churchwarden and currently a member of the choir.

A keen golfer. A theatre goer who also enjoys most forms of music, but particularly traditional English Folk and acoustic-roots music.

Laurence has served as Master since January 2021 and Governor in Charge of Almshouse Property since August 2021.