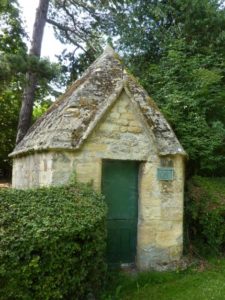 At the south-east corner of Albert Park, where Park Road and Park Crescent meet, there stands a small hexagonal stone building. This is Conduit House.

This unusual building supplied the needs of the citizens of Ock Street at a time when water from other sources was not safe to drink. It stands in an area of plentiful natural springs which fed a cistern in the building, and the water was led thence downhill via stone channels. Its destination was a fountain in Ock Street.

It is not known when the Conduit House was built. It belonged to Abingdon Abbey at the time of the Abbey’s dissolution in 1538, and then it passed to the Crown. In 1553 it, and the surrounding land, passed to Christ’s Hospital. It was mentioned in the Amyce survey of Abingdon in 1554.  Conduit House remained in use until 1875 when a mains water supply was installed for the Town.

Funded largely by Christ’s Hospital, major internal and external repairs were completed in October 2022.  The schedule of works included the removal of vegetation on the roof causing water ingress, repairs to the damaged mortar and badly weathered stonework.   Rods have been used to stabilise the stonework and ventilation increased.   The works were undertaken by a local  specialist masonry firm.